Reflections on the MBA annual convention

Dec 15, 2022·Authored by Jeffrey B. Flory
Subscribe to newsletters

Many of the attendees at the recent 2022 Mortgage Bankers Association’s (MBA) annual convention left the three-day convention – featuring a speech from former Speaker of the U.S. House of Representatives Paul Ryan and a performance by Darius Rucker – with mixed feelings. Despite the somber reality of the current state of the mortgage market, there was a palpable underlying optimism for what the future holds. Though many believe we are not yet clear of the difficult climate we are in, calmer days are coming and collectively the industry is heading towards a sense of normalcy once again.

In his economic outlook session on the first day of the convention, MBA’s chief economist Mike Frantantoni made predictions that were not surprising and generally in line with the consensus sentiment from the attendees. The forecast for next year indicates a recession (albeit an expected mild one) and that mortgage origination volumes should decline year-over-year from the anticipated $2.25 trillion in 2022 down to just below $2.0 trillion in 2023. Initial estimates for 2024 show a bit of a rebound back to $2.3 trillion. 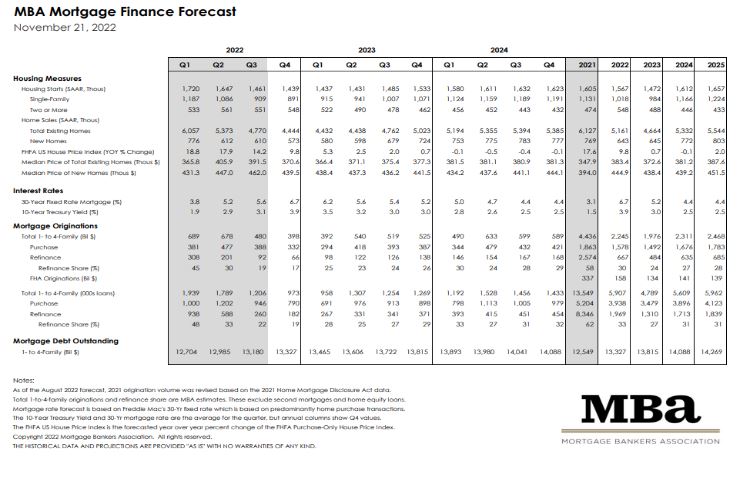 The key to how hard of a landing will be seen in some key economic data to be released before the end of the year. The 7.7% consumer price index (CPI) figure released by the U.S. Bureau of Labor Statistics (BLS) on Nov. 10 seemed to indicate that some of the Fed’s aggressive actions over the last several months were starting to show signs of getting things back on the right track. Frantantoni pointed out that in the current economic state, it is more important to read between the lines of some of the statements coming from the Federal Reserve Board of Governors. Some recent statements from them indicate that we’ve done enough and that there may be some concerns about overshooting.

Regarding the job market – the byproduct of slowing job growth and Fed interest rate activity should lead to a rise in unemployment numbers in 2023-24. The mortgage industry has been one of the hardest hit sectors in 2022, and with estimates of 15-25% overcapacity currently based on volumes, there will likely be more layoffs as firms react and adjust. Other sectors are making moves similar to this, and it is anticipated that by the end of 2023, unemployment will be around 5.2% and drop in 2024 to 4.4%.

Interest rate volatility is higher today than it was in 2020, but not as high as it was in the 2008-09 period. The outlook for interest rates is that we’re currently in a spike and that as inflationary pressures cool, rates will cool as well – which could lead to some refinance opportunities in mid-2023 as rates settle around 5.5%. In addition, home equity positions are strong due to rapid price appreciation over the last several years. While the Homeowners Protection Act (HPA) has been cooling – in some markets more rapidly than others – even the expected pull back in 2023 won’t unduly pressure homeowners’ ability to tap home equity in the event of a need.

While Harry Truman was famous for asking for a one-handed economist, Bill Adams from Comerica gave a presentation at the Texas MBA Mortgage Symposium – and he readily acknowledged that he’s a two-handed macro economist. On one hand, he pointed to the Purchasing Managers Index (PMI) and talked about how in early 2020, the PMI was giving early warning signs that inflationary pressures were already starting to gurgle – long before it was on the radar screen of the BLS. Recent data suggests that we are already on the road to a recovery and that the spending trends have been shifting this year as well – post-pandemic activities are seeing a noticeable shift to spending on entertainment, travel and dining out. On the other hand, he pointed to data that showed that costs for some “sticky services” such as veterinary care, motor vehicle repairs and daycare were still accelerating.

For mortgage originators, the overarching concern is volatility and profitability. Typically, mortgage bankers fare well in the second and third quarters in terms of profitability as those are generally seen as higher origination periods and fixed operational costs are spread out over a larger number of new loans. Since 2008, there have only been four quarterly periods where overall mortgage banking profitability (based on a survey of independent mortgage bankers) has been negative and 2022 marks the first time a negative quarterly profit number showed up in the second quarter. While Q3 numbers are not out (as of this writing), it is also anticipated to be a challenging quarter and may be the first time ever to see two consecutive quarters of negative profit for mortgage banks.

At the convention, MBA’s Marina Walsh discussed such technology concerns as cutting IT costs, managing information security costs, picking the right team, integration efforts and adoption among the user base. Back in 2020, Rick Hill of the MBA estimated that volume decreases would lead to the increased, rapid implementation of enabling technologies as overutilized resources would have the time and the ability to focus on them. The gradual decrease in volumes didn’t materialize and in general, firms were not able to re-prioritize internal resources and important projects were delayed.

While there are several arguments concerning whether a slow deflation of rates would have been better than what we experienced earlier this year with the largest increase in interest rates in 40 years, in reality the lenders had to make quick-fire decisions with the same alacrity as they had to at the onset of the pandemic when we moved to all-remote.

Shift away from reaction mode

From our perspective, now that there is a light at the end of the tunnel in terms of the aforementioned “calmer waters,” we are seeing firms that have been in reaction mode over the course of 2022 start to focus on the elements within their origination shops that they had put on the back burner.

What is generally true is that these organizations now have to do more with less. Operational staffing has been and will continue to be reduced, and systemic issues that weren’t adequately addressed during the last two years of capacity stressing volumes are now coming to the forefront. The lack of internal resources to tackle those issues can prove to be problematic.

This is a great time for strategic conversations with your vendors as you prepare to close the books for 2022 and prepare for 2023. If you are not aware of your vendor’s full suite of offerings, you should be. Oftentimes, a decision to onboard a vendor was single-threaded through one particular service – and having a candid conversation about the goals and objectives for your organization in the coming year could provide multiple benefits.

A vendor in your existing stable may be able to find solutions for issues you weren’t aware they had the means to solve. Vendors are traders of anecdotal best practices and can act as neutral observers, provide unemotional input for certain business challenges and put the proper perspective on business ideas.

Our time at the MBA Annual Convention was fruitful in many regards. We had conversations with clients and prospects looking forward to the future while being very cognizant of the ongoing struggles we’re collectively facing. We spoke with fellow vendors and shared ideas about what firms are talking about and how we can provide solutions or resources to help. What was almost universally true during our time in Nashville is that while not many people set out with intent on being in the mortgage business, once we get in it, we are dedicated to it and to each other.

Need more information on this topic? Lets go there:

Data, analytics and the difficulty in determining a direct return on investment