In this entertaining and informative webinar, these two leaders discussed the current economic circumstances and the post-recovery outlook. Anirban answered pressing questions and gave his thoughts on economic hot topics. 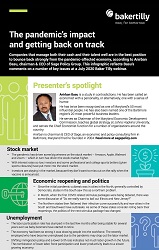 Download our infographic for an economic overview of the pandemic's impact

Companies that manage both their cash and their talent well are in the best position to bounce back strongly from the pandemic-affected economy, according to Anirban Basu, chairman and CEO of Sage Policy Group.

The pandemic has driven some big winners on the stock market – Amazon, Apple, Walmart and Zoom – which in turn has driven the stock market higher. With interest rates so low, where else can investors put their money? With most professional and college sports closed, some think that the stock market has done so well because people can’t bet on sports. Plus, no one wants to miss out on the rally when the vaccine is announced.

Since the initial pandemic outbreak was generally in cities in the North, generally controlled by Democrats, many states in the South saw this as a northern problem. When the first COVID related stimulus packages were being debated in March, there was some discussion along the lines of “Do we really want to bail out Illinois and New Jersey?” The Northern states then flattened their infection curve successfully and now cities in the South and Southwest have outbreaks. As some of these states consider rolling back their reopenings, the politics of the next stimulus package has changed.

The labor participation rate has slumped in the last few months after being stable for several years even as baby boomers have started to retire. The economy had been so strong it was drawing people into the workforce. The recently employed who have become unemployed die to the pandemic may drop out the labor market altogether. Shifting immigration policy and a lower birth rate indicates not much labor growth in the future. In addition, productivity growth has dropped. This combination of lower labor force participation and lower productivity leads to a slower growing economy.

The chances of a double-dip recession are very high. Prior to the pandemic, there were vulnerabilities in the economy. Not all parts of the economy, such as agriculture, had participated in the expansion. Manufacturing had several months of recession in 2019, and the auto industry peaked in 2016. Add to that the ongoing trade wars. The biggest vulnerability, however, is preexisting indebtedness by corporations, households and the U.S. government. As the existing stimulus (such as one-time stimulus checks and extra unemployment benefits) run out, the preexisting vulnerabilities will rise up and cause a double-dip recession.

Mortgage delinquencies are high because people lost jobs and people are conserving cash. On the other hand, mortgage applications are quite strong, which can be attributed to the combination of people wanting to social distance, millennials coming of age, low mortgage rates and the need for a home office.

There is a commercial real estate crisis in the U.S.: empty office suites, abandoned storefronts, shuttered restaurants and the increasing awareness by many workers that they can work remotely and be productive. During the expansion, many businesses moved from Class B to Class A and A+ office space. This was partially to stroke the ego of the CEO showing off a nicer space, but also because businesses could afford the space and it was an effective recruitment tool for new talent. Now, with unemployment high and the economy uncertain, many companies may consider a move back to a Class B, suburban setting.

The national debt isn’t a crisis until the bond market says it is, and it isn’t saying that yet. Maybe the debt won’t be a crisis until 2026, when the Medicare trust fund is estimated to become insolvent. At that point, Congress may have to pass legislation to push closer to a balanced budget.

Getting back on track

It will take a vaccine – or some type of efficacious treatment – to get the economy back on track. Behavior change, like mask wearing and social distancing, will not be enough. Even without a vaccine, the U.S. was on track for a V-shaped recovery, with May and June job growth accounting for about a third of the jobs lost in March and April. The recovery plateaued, however, as local economies opened up.

In the meantime, businesses have to conserve cash and hold onto their top talent. Economies grow when companies deploy cash aggressively and hire people aggressively. Because when the recovery starts, you will need that top talent to leverage fully the expansion to come.

Good performance comes from great leadership, and great leaders working together. The hope is that the radical center can emerge and people can talk across the aisles, start to make some good policy and think of the role of the U.S. in the global economy and figure out how to train a 21st century workforce.

Download our infographic for an economic overview of the pandemic's impact