The road to CIO-SP4: uncharted but not entirely uncertain

Aside from DoD’s ASTRO solicitation scheduled for release in early 2020, the next big contract that IT and Professional Services firms should have their eyes on is NITAAC’s Chief Information Officer Solutions and Partners 4 (CIO-SP4).  Based on recent communications, the CIO-SP4 solicitation is expected to be released in October of 2020, with a draft solicitation to be released in March 2020.

NITAAC (NIH Information Technology Acquisition and Assessment Center) has used a traditional best value approach on previous iterations of the CIO-SP”x” contracts, but it appears that the recent successes of scorecard RFPs has found its way to NITAAC.  Based on recent correspondence between NITAAC and current CIO-SP3 holders, we anticipate NITAAC to adopt their own version of the scorecard RFP for the CIO-SP4 on-ramp.

In the sections that follow, we will take a look at CIO-SP3 in an effort to understand what the future might look like under the next iteration of this Governmentwide Acquisition Contract (GWAC).  Based on our historical review and research of the current state, we will also make some educated projections about what to expect and how to prepare for CIO-SP4.

CIO-SP3 is considered a “Best-in-Class” (BIC) GWAC as defined in the Federal Government’s “Category Management” initiative. The vehicle is a multiple-award, indefinite-delivery, indefinite-quantity GWAC, available for use by every federal civilian and DoD agency.  There are currently 53 CIO-SP3 contract holders (51 other than small businesses and 2 small businesses).  There are also 5 small business vehicles for various socioeconomic categories, but for the purposes of this article we are focused on the unrestricted vehicle.

Given that NITAAC administers the contract, it is not a surprise to find that the Department of Health and Human Services (HHS) accounts for nearly half of the total spend under the vehicle.  Within HHS, the National Institutes of Health (NIH) and the Center for Medicare and Medicaid Services (CMS) are the two largest buyers.  DoD also accounts for a significant amount of the spend under CIO-SP3, followed by USDA, VA, ED, and DOJ.

Total contract spend has increased by an average of 25%, year over year, and has grown to approximately $1.9B in FY2019.  The following two tables provide a breakdown of CIO-SP3 contract spend since 2016. 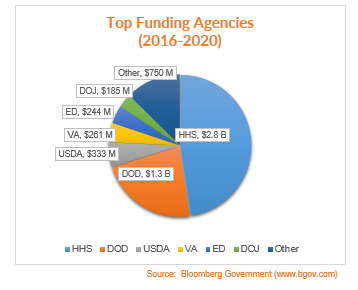 The CIO-SP3 vehicle is designed for IT solutions and services, including heath and biomedical-related IT services to meet scientific, health, administrative, operational, managerial, and information management requirements.  The primary NAICS code is 541512 (Computer Systems Design Services), but the types of services sold under the contract vary widely at the task order level.

The 2012 solicitation provides insight into the type of services offered under the vehicle, with the use of “Task Areas.”  NITAAC outlined 10 task areas (listed below) that contractors were required to address in their written proposals:

While we expect certain aspects of CIO-SP4 to align closely with CIO-SP3, there will be some major changes to CIO-SP4. Here is Baker Tilly’s take:

Buyers: Just as everyday consumers develop preferences in where they shop, agencies also develop preferences.  Buying centers within the federal government become accustomed to certain contract vehicles and to the contractors who sell through those vehicles.  For this reason we anticipate that agency spend under the future CIO-SP4 contract will largely reflect the breakout among agencies that we have seen on CIO-SP3.  As RFP writers, NITAAC will prepare a solicitation that caters to their needs, but also entices other federal buyers to choose their vehicle.  The largest agency buyers will have a say in RFP scope and structure.

Contract Holders: On the industry side, while incumbent CIO-SP3 contractors are expected to have a “leg-up”, NITTAC has indicated it is interested in moving to a self-scoring system for proposal evaluation (more on this below).  Incumbents will have the benefit of a portfolio of existing CIO-SP3 task orders to rely on, which will certainly look strong in a CIO-SP4 proposal, especially if they are “health or bio-medical IT” related.  Correspondence at quarterly contract holder meetings may also provide incumbents with greater insight into solicitation expectations; however, scorecard RFP’s deviate from traditional best value procurements in a number of ways.  CIO-SP3 contract holders may or may not have the best proposal score, even if they are incumbents.  This could present opportunities for those who are currently on the outside looking in.

Scope: The CIO-SP4 scope will be similar to that of CIO-SP3; however, a significant refresh may be necessary to account for IT trends in the digital age.  For example, as part of a recent market research exercise performed by the Professional Services Council (PSC) and industry teams, key priorities of HHS were found to include:

Given that NITAAC is an organization within HHS, a Health IT focus is certainly expected.  Contractors that were successful under the CIO-SP3 vehicle are likely to have past performance submissions that will be in line with the expected Task Areas on CIO-SP4.

Procurement Method:  A move to a scorecard RFP will be the most significant update to this existing class of NITAAC vehicles.  Scorecard RFPs led by other agencies over the course of the last several years have placed a significant emphasis on the submittal of complex relevant experience projects with strong past performance ratings, as well as proof of approved contractor systems, certifications, and clearances.  We anticipate a similar focus from NITAAC on CIO-SP4.  Based on experiences working with contractors to prepare bids for other scorecard RFPs like OASIS and Alliant (conducted by GSA), we recommend preparing by beginning to consider or perform some basic activities.

2.     Begin Accumulating Documentation:  The administrative burden associated with these proposals is significant.  We recommend beginning to accumulate the following documentation:

3.     Assign roles and determine responsibilities:  To avoid confusion when the solicitation is released, it is best to get the personnel question answered first:

Below is a summary of the OASIS scorecard, which may provide some insight into the types of attributes that NITAAC could end up considering for point-scoring purposes in CIO-SP4 proposals.

Additionally, GSA only accepted DCMA, DCAA, and/or “Cognizant Agency” approval for these systems and rates, but it is unclear what level of approval NITAAC will accept in their CIO-SP4 evaluations.  Contractors without approved systems should pay close attention to whether NITAAC decides to accept approvals from accredited third parties in addition to government agency approvals.

Interestingly, NITACC has also preliminarily indicated that point scoring criteria for certifications could include FEDRAMP approval – which would be a notable departure from previous popular scorecard frameworks.

To prepare, contractors should:

There are many open questions related to allowable teaming structures, the anticipated number of contract awards, and timing.  CIO-SP3 and CIO-SP3 Small Business solicitations did allow for partnership and joint venture CTAs, but it would be a leap to assume they will do the same with CIO-SP4.  While sales through the vehicle have grown consistently over the past several years, we cannot be certain if the number of CIO-SP4 contracts awarded will also rise.  As for timing, announcements from NITAAC identify October 2020 as the solicitation release date (with a draft RFP to be released by March 2020), but that timeframe is certainly not set in stone.  Baker Tilly plans to track this procurement closely, so stay tuned for updates on any new developments.

Process improvement: tapping the knowledge of your process whisperers