This week, the House Ways and Means Committee began discussing and marking up sweeping draft legislation that substantially modifies many provisions of the Tax Cuts and Jobs Act of 2017 (TCJA).

Changes are expected as the legislation moves through the reconciliation process. It is likely the Senate Finance Committee advances its own version as the Senate works through the budget process. Ultimately, both the House and the Senate will need to combine their respective bills to form one comprehensive package.

In addition to the House legislation, Senate Finance Committee Chair Ron Wyden, D-Ore., proposed a separate bill that would drastically alter partnership taxation, if enacted. Whether any of its provisions will end up in finalized legislation is currently unknown. However, given its potentially seismic effect, its most notable content is discussed below.

Finally, the House bill also includes sweeping international tax changes, which will be covered in an upcoming alert.

Likelihood of passage and timing

In August, Speaker of the House Nancy Pelosi agreed to bring the Senate-passed bipartisan infrastructure bill, outlined in our previous alert, to the floor for a vote by Sept. 27. Ideally, Democratic Party leaders would like to have reconciliation prepared and ready for a vote by that date, but that remains an aggressive timeline. The budget reconciliation process is complex, and many rules in the Senate will likely slow the process. Furthermore, there is little margin for disagreement given the slim majorities the Democrats hold in each chamber.

There are two notable moderate Democratic senators, Joe Manchin (West Virginia) and Kyrsten Sinema (Arizona), who have been vocally opposed to the target price tag of $3.5 trillion, and all 50 Democratic Senate votes will be needed for passage. Given there is not yet a consensus on the various proposals, plus the Senate is still developing its own bill (which will need to be reconciled with the House bill prior to final passage), this process could take until late in the year to be completed.

You should be aware of these proposals for your own tax planning, but it is important to keep in mind that these are just that, proposals. There is no guarantee any of these will be enacted in their current format, if at all. Recall that the TCJA proposals in September 2017 were quite different, in many cases, to the final legislation that finally passed that December. While the capital gains rate increase would potentially have an effective date of Sept. 13, 2021, that does not mean it may not move to a different date. However, that should not be taken to mean that income should be recognized before the end of 2021 in advance of a potential rate increase. The tax cost should be only one component of an analysis. The ultimate question for an investor should be whether maintaining the investment makes economic sense for them.

Key takeaways: The 12 most impactful provisions

Top tax rates for individuals, trusts and estates would increase. 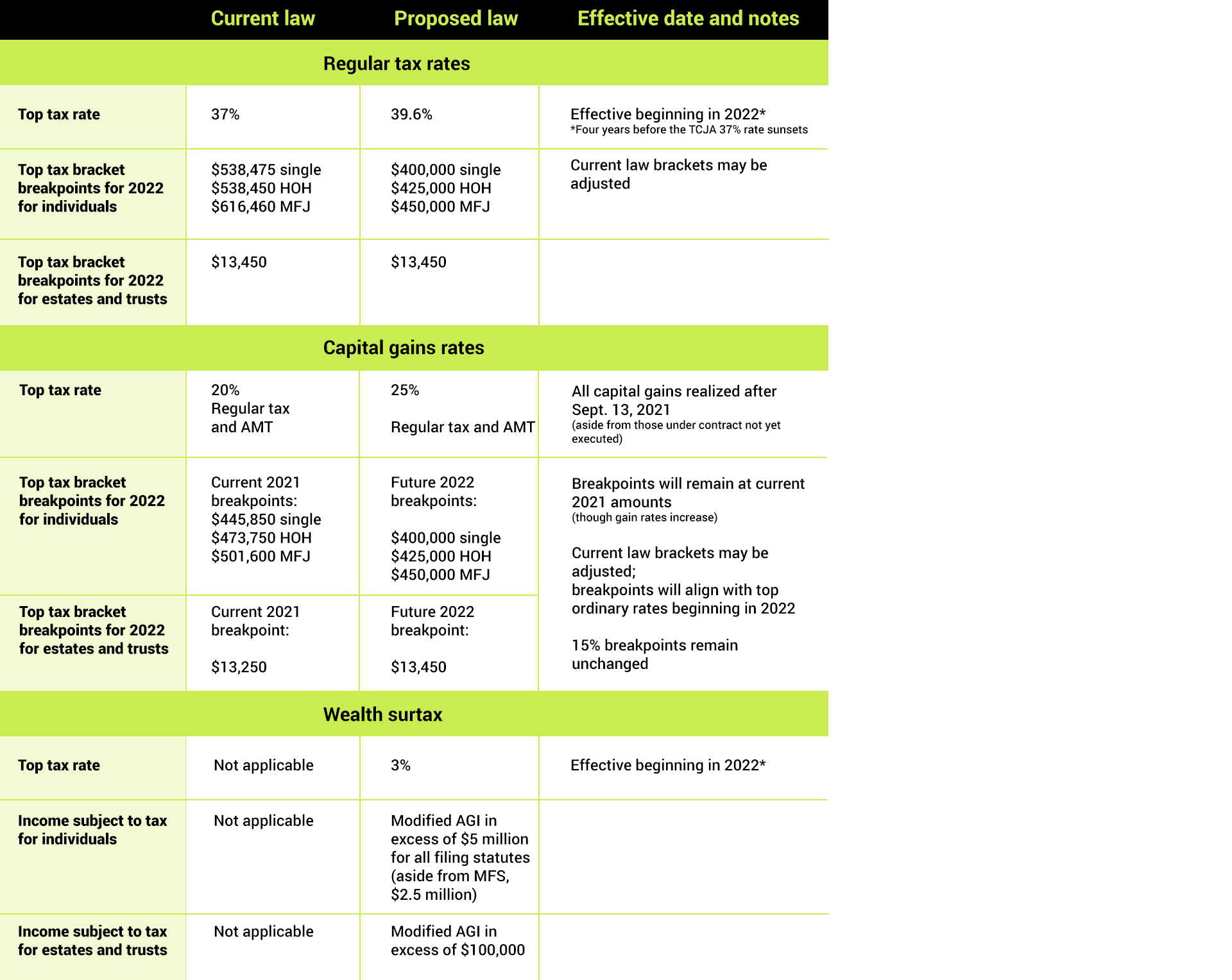 Net investment income tax would expand to include trade or business income of certain high-income individuals.

The qualified business income deduction would be limited to a maximum annual deduction.

Corporate rates would return to a graduated rate structure, with an increase in the top rate.

IRAs, particularly those with large balances, would see changes in contribution and distribution rules. 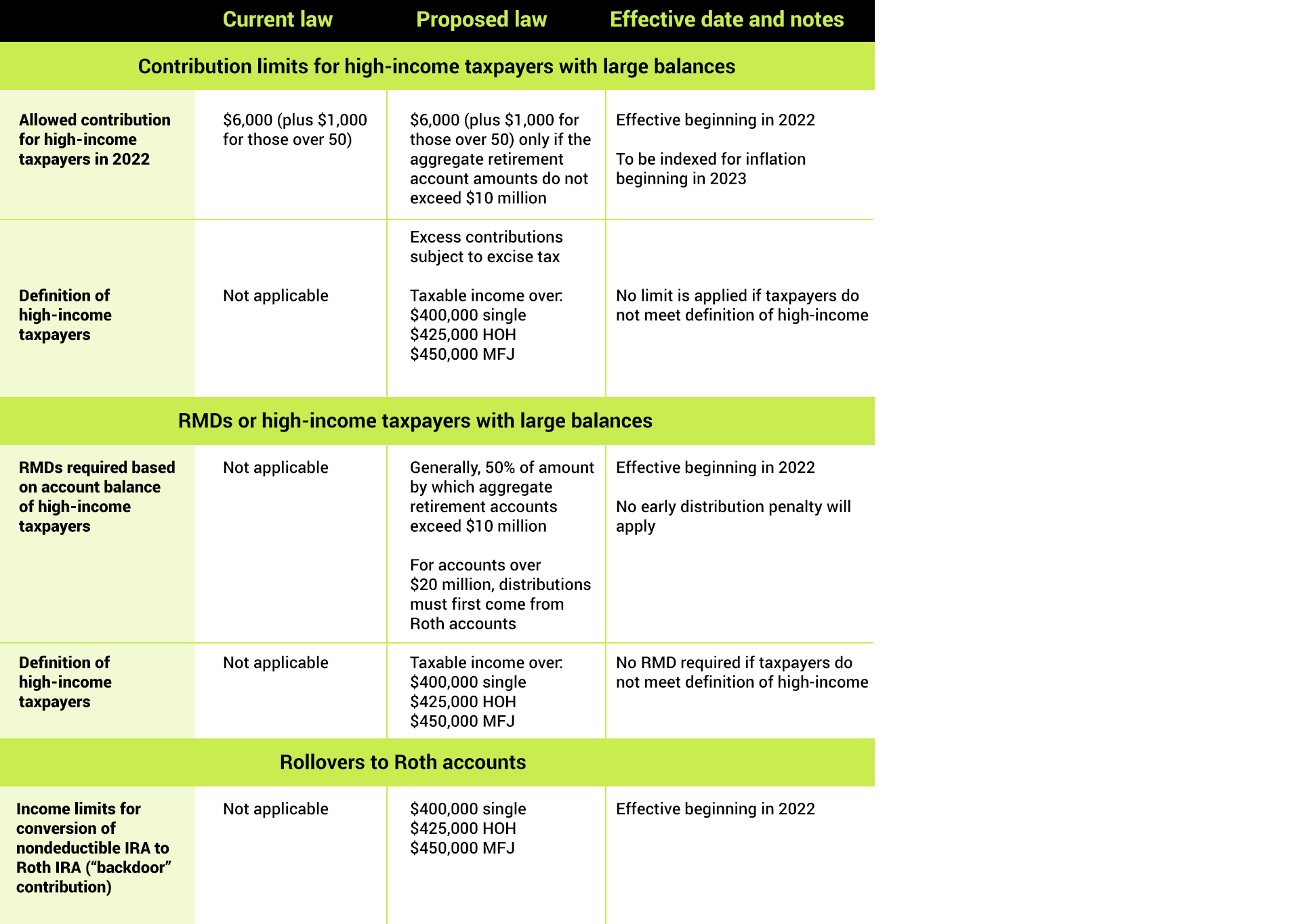 The requirement to amortize certain expenditures will be further delayed.

8. Temporary ability for certain S corporations to reorganize as partnerships without tax

9. Changes to gain and loss recognition

10. Changes to gift tax and estates

The unified credit would revert to pre-TCJA levels.

The proposed bill also makes meaningful changes to the treatment of grantor trusts, attempting to align the income tax and transfer tax rules. Of note for estate administration is a provision that would include the grantor trust in a deceased owner’s estate if the grantor was the deemed owner of the trust. Transactions between a grantor trust and the grantor would also become fully taxable.

Rules for partnership interests held in connection with performance of services would be altered.

In addition to the House bill, as previously mentioned, Sen. Ron Wyden proposed legislation that would drastically alter partnership taxation if enacted. While it is far too early to know if the Senate Finance Committee will approve all or a portion of this proposal, the provisions are far reaching. Among the changes proposed are:

The House bill does not contain similar provisions, but that does not mean this would not move forward.

More on the table

The legislation also contains many more provisions, including President Biden’s priorities such as expansion of the child tax credit, improvements to the child and dependent care tax credit, and dozens of others.

We encourage you to connect with your Baker Tilly advisor regarding how any of the above may affect your tax situation.

The information provided here is of a general nature and is not intended to address the specific circumstances of any individual or entity. In specific circumstances, the services of a professional should be sought. Tax information, if any, contained in this communication was not intended or written to be used by any person for the purpose of avoiding penalties, nor should such information be construed as an opinion upon which any person may rely. The intended recipients of this communication and any attachments are not subject to any limitation on the disclosure of the tax treatment or tax structure of any transaction or matter that is the subject of this communication and any attachments.

tax alert
Next up